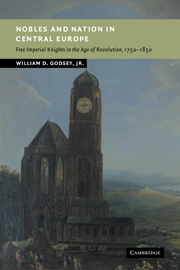 Nobles and Nation in Central Europe
Free Imperial Knights in the Age of Revolution, 1750–1850