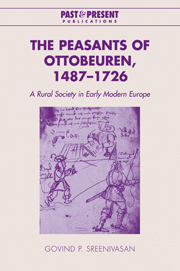 The Peasants of Ottobeuren, 1487–1726
A Rural Society in Early Modern Europe