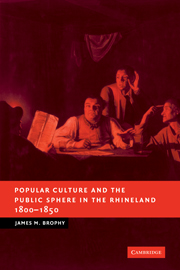 Popular Culture and the Public Sphere in the Rhineland, 1800–1850