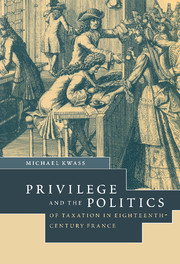 Privilege and the Politics of Taxation in Eighteenth-Century France
Liberté, Egalité, Fiscalité