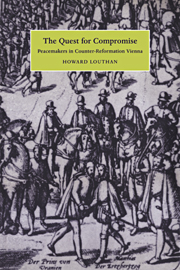 The Quest for Compromise
Peacemakers in Counter-Reformation Vienna