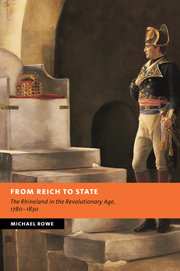 From Reich to State
The Rhineland in the Revolutionary Age, 1780–1830