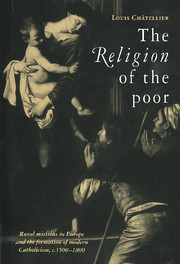 The Religion of the Poor
Rural Missions in Europe and the Formation of Modern Catholicism, c.1500–c.1800