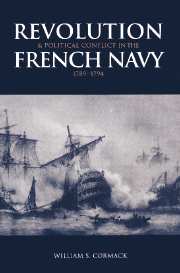 Revolution and Political Conflict in the French Navy 1789–1794