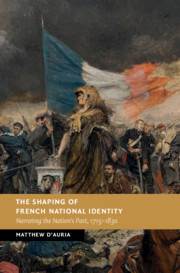 The Shaping of French National Identity
Narrating the Nation's Past, 1715–1830