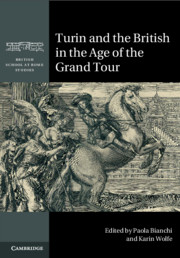 Turin and the British in the Age of the Grand Tour