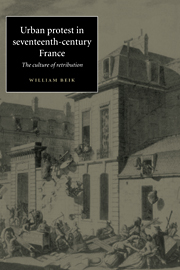 Urban Protest in Seventeenth-Century France
The Culture of Retribution