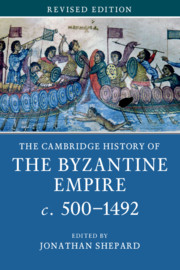 The Cambridge History of the Byzantine Empire c.500–1492