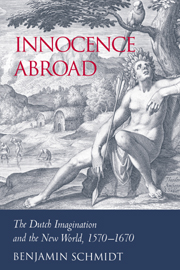 Innocence Abroad
The Dutch Imagination and the New World, 1570–1670