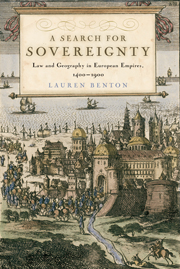 A Search for Sovereignty
Law and Geography in European Empires, 1400–1900