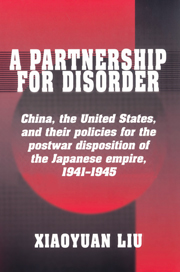 A Partnership for Disorder
China, the United States, and their Policies for the Postwar Disposition of the Japanese Empire, 1941–1945