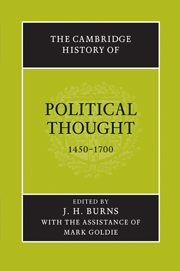 The Cambridge History of Political Thought 1450–1700