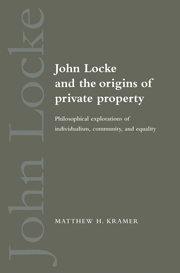 John Locke and the Origins of Private Property
Philosophical Explorations of Individualism, Community, and Equality