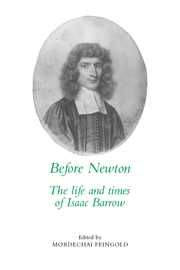 Before Newton
The Life and Times of Isaac Barrow