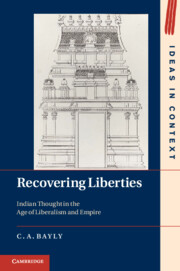 Recovering Liberties
Indian Thought in the Age of Liberalism and Empire