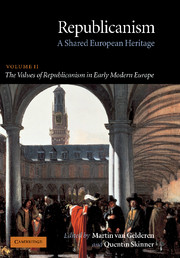 Volume 2. The Values of Republicanism in Early Modern Europe