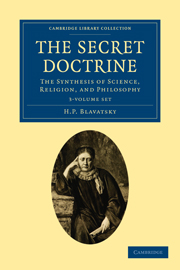 The Secret Doctrine
The Synthesis of Science, Religion, and Philosophy
3 Volume Paperback Set