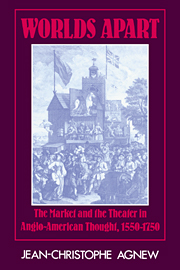 Worlds Apart
The Market and the Theater in Anglo-American Thought, 1550–1750