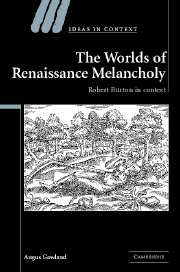 The Worlds of Renaissance Melancholy
Robert Burton in Context