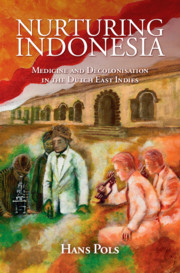 Nurturing Indonesia
Medicine and Decolonisation in the Dutch East Indies