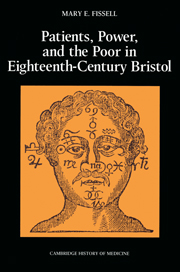 Patients, Power and the Poor in Eighteenth-Century Bristol