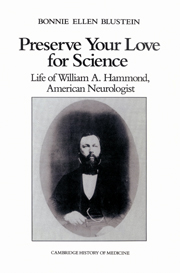 Preserve your Love for Science
Life of William A Hammond, American Neurologist