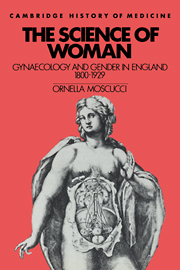 The Science of Woman
Gynaecology and Gender in England, 1800–1929