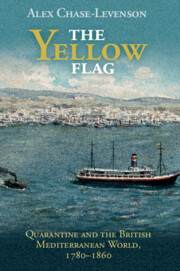 The Yellow Flag
Quarantine and the British Mediterranean World, 1780–1860