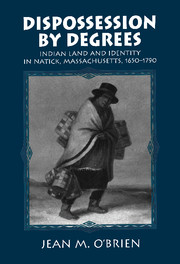 Dispossession by Degrees
Indian Land and Identity in Natick, Massachusetts, 1650–1790