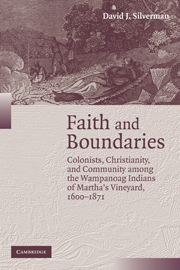 Faith and Boundaries
Colonists, Christianity, and Community among the Wampanoag Indians of Martha's Vineyard, 1600–1871