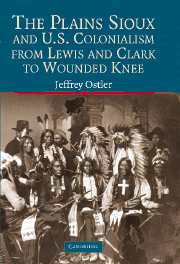 The Plains Sioux and U.S. Colonialism from Lewis and Clark to Wounded Knee