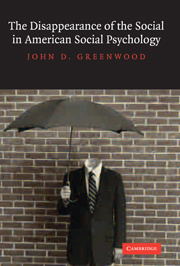 The Disappearance of the Social in American Social Psychology