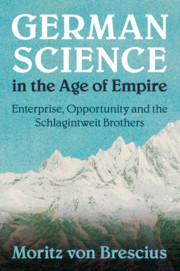 German Science in the Age of Empire
Enterprise, Opportunity and the Schlagintweit Brothers