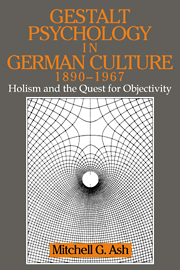 Gestalt Psychology in German Culture, 1890–1967
Holism and the Quest for Objectivity