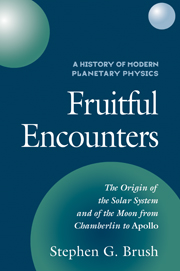 Volume 3. The Origin of the Solar System and of the Moon from Chamberlain to Apollo