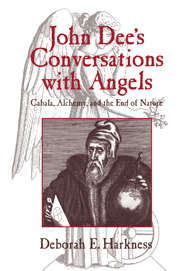 John Dee's Conversations with Angels
Cabala, Alchemy, and the End of Nature