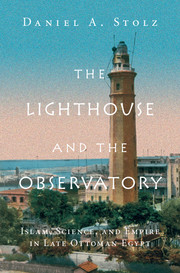 The Lighthouse and the Observatory
Islam, Science, and Empire in Late Ottoman Egypt