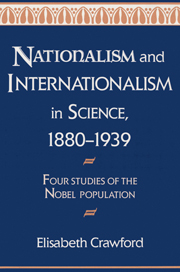 Nationalism and Internationalism in Science, 1880–1939
Four Studies of the Nobel Population