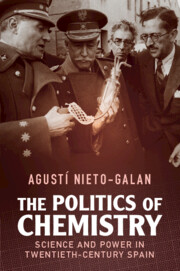 The Politics of Chemistry
Science and Power in Twentieth-Century Spain