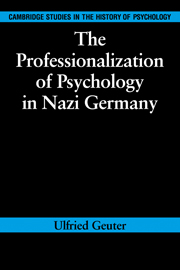 The Professionalization of Psychology in Nazi Germany