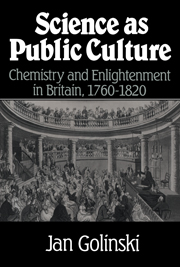 Science as Public Culture
Chemistry and Enlightenment in Britain, 1760–1820