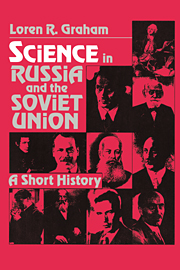 Science in Russia and the Soviet Union
A Short History

Part of Cambridge Studies in the History of Science