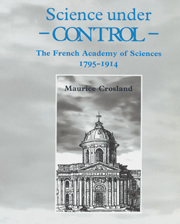 Science under Control
The French Academy of Sciences 1795–1914