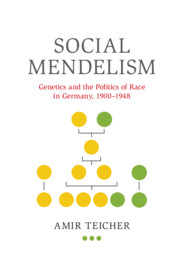 Social Mendelism
Genetics and the Politics of Race in Germany, 1900–1948