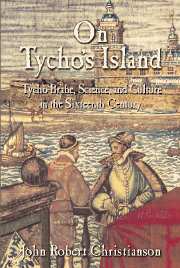 On Tycho's Island
Tycho Brahe, Science, and Culture in the Sixteenth Century