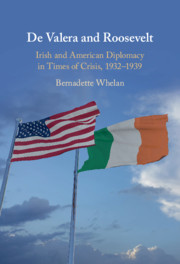 De Valera and Roosevelt
Irish and American Diplomacy in Times of Crisis, 1932–1939