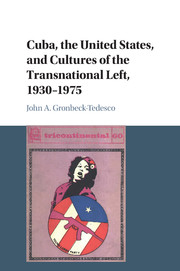 Cuba, the United States, and Cultures of the Transnational Left, 1930–1975