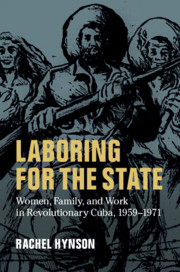 Laboring for the State
Women, Family, and Work in Revolutionary Cuba, 1959–1971