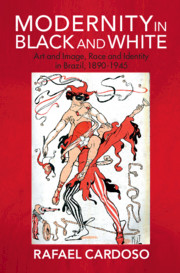 Modernity in Black and White
Art and Image, Race and Identity in Brazil, 1890–1945