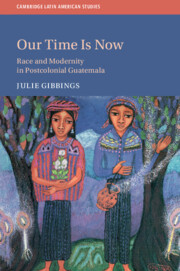 Our Time is Now
Race and Modernity in Postcolonial Guatemala